About a third of Holocaust survivors in the U.S. live in poverty. This group helps them.

Bernard Offen at Auschwitz-Birkenau, where he was imprisoned during the Holocaust. He is shown in 2018 before a “Ride for the Living” bike ride from Auschwitz to Krakow. The following year, he got help from KAVOD to pay bills and buy food. (Photo courtesy of Bernard Offen)

Bernard Offen knows hunger and despair. From ages 10 to 16, he survived five concentration camps during the Holocaust.

Now 92, Offen divides his time between California and Poland, where he gives tours of the former Nazi concentration camp Auschwitz-Birkenau and shows visitors the bunk where he slept crammed with other Jewish prisoners, the building where he was tattooed with his identification number and the crematorium where his father’s body was burned.

More than 59 of his extended family members in Poland perished during the Holocaust, he said. Offen was determined to rebuild his life after World War II ended and he immigrated to Detroit, where he and his wife raised two sons and started a coin laundry business in 1951.

It never occurred to him that when he reached his 90s, he might need to ask for help to keep food in his refrigerator. Bernard Offen, arm extended, shows a tour group the apartment where his family lived in the Krakow Ghetto before they were sent to concentration camps. (Photo courtesy of Bernard Offen)

Two years ago, when John Pregulman and Amy Israel Pregulman of Denver met Offen while visiting the Auschwitz-Birkenau Memorial, they told him about a program they had founded for Holocaust survivors in the United States called KAVOD — a word that roughly means dignity in Hebrew.

The nonprofit group works with Jewish human service agencies in about 60 cities and towns from Seattle to Philadelphia to help survivors with emergency needs such as dental care, home repairs, transportation and groceries, said Amy Israel Pregulman.

Offen didn’t think he would ever need to reach out to KAVOD, but a few months after returning to his home in Yucca Valley, Calif., from Krakow in 2019, he found himself running short on funds and unable to pay all his bills and buy food, he said.

Although he was reluctant to ask for assistance, Offen contacted the Pregulmans and was put in touch with someone from a local Jewish Family Service agency who gave him several grocery gift cards paid for by KAVOD donors. The cards helped him to get through a few difficult months, he said.

“I’d just been trudging along, doing the best that I could,” said Offen, a Korean War veteran who has made several videos about his Holocaust experiences and has written a book, “My Hometown Concentration Camp,” about how he and two older brothers (now deceased) survived.

“I’m very grateful for the help, but I honestly didn’t like to ask for it,” he said. “And I still don’t.”

It’s a sentiment that the Pregulmans hear often.

“Many survivors are just one bill away from poverty,” said John Pregulman, 63, an investment banker and freelance photographer.

“They’ve experienced things we could never imagine, and a lot of them don’t like to be on a list of any kind,” he said.

The idea for KAVOD came about after John Pregulman was asked by a friend to photograph several Holocaust survivors for the Illinois Holocaust Museum and Education Center in 2012.

“It was life-changing for me, and my friend encouraged me to continue taking photographs of survivors,” he said. “He told me their biggest fear was that they’d be forgotten.”

In 2015, John Pregulman went to Orlando and ended up at a 94-year-old survivor’s house.

“She wanted to give me something to eat, but when she opened her fridge, I could see that this lady didn’t have much of anything,” he said.

He recalled asking her: “What happened? Where is your food?’”

“She told me her air conditioner had broken and she had to use her money for the month to fix it,” he recalled. “‘I’m used to being hungry,’ she said. ‘I’ll wait until my next (Social Security) check to buy groceries.’”

John Pregulman said he felt sad and horrified. He told his wife about the conversation and they arranged to get the woman some help. Then they decided to start a nonprofit group to help take care of needs for Holocaust survivors that often aren’t met by other agencies, he said.

The Pregulmans found out in 2018 that one-third of 80,000 Holocaust survivors in the United States were living in poverty, according to The Blue Card Foundation, another charity that helps survivors. That’s a higher percent than the U.S. population overall — in 2017 about 12 percent of people aged 80 and older were living in poverty.

“It’s a complex question as to why this happens,” said Amy Israel Pregulman. “Part of it is that their medical and emotional needs are magnified based upon the trauma they experienced. They were beaten and put through starvation. We’ve found that dental issues are a huge problem.”

In 2019, KAVOD partnered with the Seed the Dream Foundation to create the KAVOD Survivors of the Holocaust Emergency Fund to reach even more survivors. So far, more than 18,000 requests have been met.

Most survivors manage pretty well on their own and simply need help now and then with an unexpected expense, noted John Pregulman.

He has photographed more than 1,000 survivors and says there is not a commercial aspect to it — he enjoys giving his subjects free portraits. He will also alert local Jewish help agencies if he notices that someone is having difficulty buying groceries or keeping bills paid. KAVOD will then send gift cards to cover any immediate needs that a survivor might have, he said.

Donations from KAVOD’s Survivors of the Holocaust Emergency Fund have made a noticeable difference for about 150 survivors who utilize resources from Jewish Family Service of MetroWest New Jersey, said Liz Levy, a social worker and coordinator of Holocaust services for the agency in Florham Park, N.J.

“It was frustrating when there wasn’t enough emergency funding for survivors’ needs as they aged,” said Levy. “And now KAVOD allows us to say ‘yes’ to those emergency needs so they can age with dignity.”

“We’ve taken care of meal deliveries and groceries and have been able to cover many medical and dental needs thanks to KAVOD,” she added.

Judy and Alex Buchler live in a retirement community in Rockaway, N.J., and said they are grateful for the meals they receive from Levy’s agency every two weeks due to KAVOD donations. The nonprofit group also pays to send home health-care aides to help Alex Buchler, 96.

Judy Buchler, 92, said she was forced to haul stones in a Hungarian camp when she was 15, while Alex endured equal pain and hardship at a munitions factory. The couple met after the war in Israel and will celebrate their 70th wedding anniversary on April 8, she said.

“The ultimate revenge is to live a good life,” said Judy Buchler, who has two daughters, four grandchildren and four great-grandchildren. “There were people who sneaked food to us in the camp sometimes, but most of them just hated us. Neither of us ever thought we would live this long, so we are very fortunate.” Holocaust survivors Judy and Alex Buchler at their home this month in Rockaway, N.J. (Edna Alperts)

In Springfield, N.J., Gertrude Gompers, 84, often reflects on the lives of her grandparents, who gave all of their savings so that her parents could flee Vienna with her when she was an infant.

“My parents were able to immigrate to England with me and we had to stay in an internment camp when the English ended up in the war,” she said. “But we made it. My grandparents were put on a cattle car and murdered at a camp in Czechoslovakia.”

When Gompers’s husband, Louis, died last year, she also lost something else, she said. Her husband’s pension was cut off, largely reducing her finances. When she learned that she needed a new hearing aid, Gompers wondered whether she could afford it. She was relieved when Jewish Family Service bought her a hearing aid with donations from KAVOD and also offered to send someone over to help her with housework, she said.

“I’ve never accepted charity or needed it in my life, but they had my back,” said Gompers. “They’re a friend when I need one and I’m very thankful.”

“It’s an extraordinary place to be — to be a witness to somebody’s story,” she said. “It’s part of our responsibility as human beings to take care of our elders. I can think of no greater honor.” 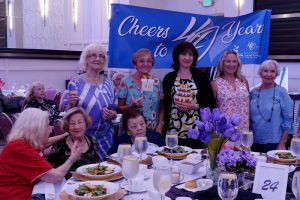 Holocaust survivors served by Ruth & Norman Rales Jewish Family Services in Boca Raton are among those supported by a national initiative. (file photo)