Denver photographer on a mission to photograph Holocaust survivors

BOULDER, Colo. — There are about 100,000 Holocaust survivors still living in the United States, and a Denver photographer wants to take a portrait of as many of them as possible.

“The photos give a face to the Holocaust, and meaning because these are real people, and it’s very important to them to know that younger generations are remembering them and will make sure they’re not forgotten,” Pregulman told FOX31.

In 38 different cities, over five years, Pregulman and his wife Amy — and their organization called KAVOD — have documented the faces of people who faced the unthinkable. One of those people is Barbara Steinmetz, 82, of Boulder. She was photographed Wednesday.

Steinmetz was a little girl when her family was forced to flee Europe to outrun the Nazis. As a refugee, she wound up in the Dominican Republic before finally coming to the U.S.

“So, I came to this country and two weeks later, my sister and I — not knowing one word of English… not knowing a soul — my sister and I were taken by train to a summer camp up in New Hampshire somewhere in the woods. And it teaches you about resiliency,” Steinmetz told FOX31.

John Pregulman says he feels humbled when his portrait subjects open up to him.

“They just don’t like to talk about it in most cases, especially to their children.  But it’s very meaningful for us when they want to talk to us and tell us what happened because they want people to know.  Because they’re very afraid that will happen again,” John Pregulman said.

A camera click may seem like a small thing.  But for this photography team, there is no better legacy than preserving these important legacies.

“It is our responsibility as human beings, as Jews, to take care of our elders — to take care of each other. And these individuals in particular have been through an experience that no one can possibly fathom,” said Amy Israel Pregulman, co-founder and executive director of KAVOD.

And the couple doesn’t just take pictures. The organization helps those in need. Of the 100,000 Holocaust survivors in the U.S., more than one-third live in poverty. So, KAVOD offers financial assistance. Learn more about KAVOD and see additional portraits on the organization’s website. 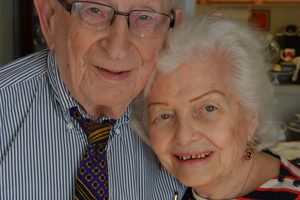 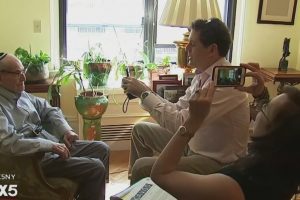 Couple on a mission to photograph Holocaust survivors By Stacey Delikat,[...]