“Beyond the Shadows” a moving and at times unsettling photographic exhibit by Judith Glickman Lauder will be on view at Peter Fetterman Gallery from September 26th through October 26th . The exhibition gathers the work of Glickman Lauder taken over the last forty years in Poland, Germany and the former Czech Republic, at locations such as Treblinka, Birkenau, Majdanek and Theresienstadt among others. The proceeds from the exhibition are being donated to KAVOD, a charity ensuring dignity for Holocaust survivors, as well as to the Los Angeles Museum of the Holocaust. An opening, book signing and artist talk is being held at the Gallery on Wednesday September 25, 6-8PM.

In an essay for the companion book “Beyond the Shadow: The Holocaust and The Danish Exception,” (Aperture 2018) which gathers the exhibition photos as well as a complementary series of images of Danish rescuers and survivors, Judith Glickman Lauder explains that when she first visited Auschwitz and Birkenau in 1988, “What I saw was horrifying terrifying. The experience was almost metaphysical. The Trip turned me around… I wanted to process what I had seen.” Although neither Glickman Lauder nor her parents were Holocaust survivors, she was struck by the fact that “all my family are from Poland and Ukraine,” countries in which up to 90% of the Jewish population were murdered.

Over a three-year period following that first trip, she returned many times to take more photos.  The most recent image in the exhibit, according to Glickman Lauder, is a photo she took some five years ago of the Wansee Conference room where Nazi officials met to organize what they called, “The Final Solution,” their plan of mass murder and genocide of the Jewish people.

Glickman Lauder’s images take many forms. Some are shot in Black and White, while others use infra-red film which renders dark objects white and looks like an X-Ray image. Some have a graininess that makes the photos seems as if taken from another time, even another planet. Yet despite the various techniques, one thing remains constant: Her images force us to see the killing places anew.

In this context, grainy images of the railroad tracks from Warsaw to Treblinka give off a palpable feeling of horror and a dread of what lies ahead. In another photo, taken in the prisoners’ barracks at Birkenau, our eye rushes past the empty bunk beds to a window at the row’s end, burning bright white with outside light – it draws one to it like an escape hatch from hell but, at the same time, the viewer is conscious that for the inmates, outside was death.

Through her photographs Lauder Glickman engages the viewer in a meditation on history, on evil, on how a place, a killing field continues to maintain a resonance of its horrific and murderous past. Glickman Lauder’s work affirms that the legacy of the Holocaust belongs to us all, to all of humanity, regardless of race, religin, ethnicity, age, or personal history.

In image after image, Lauder finds new truths in the the remnants of the Nazis factories of death. So, the infamous greeting sign at found at Dachau, “Arbeit Macht Frei” (Work makes you free), which also appears at Auschwitz, is captured in close up, exhibiting a beauty at odds with the grim proceedings there. In another photo, the Gas Chamber is just a room, an abattoir, soulless, empty, not able to yield the unimaginable agonies that occurred inside. By contrast, the chimneys at Birkenau are photographed in such a way as to make them look like Memorial markers, the Stonehenge of the extermination process.

Glickman Lauder feels her work is all the more important for people to see today, given the current climate of increased “anti-Semitism, racism and injustice all over the world…. and in the United States.” Adds Glickman Lauder, “There’s too much hate going on.”

The Holocaust, because it is fundamentally impenetrable, keeping understanding out of reach even to those who were in that other world, demands that we confront it, acknowledge it, and attempt to make meaning from it. Millions of pages of history have been written about it. Books, films, TV series have been made in countries all over the world to make a story of these crimes and methodical mass murders committed under cover of law. In each generation artists have felt compelled to respond.

This need to document, to create, to comment and to confront the Holocaust fills the void that exists because the Holocaust was in its principal aim devoted to elimination, erasure, and to manufacturing and perpetrating absence.

During the Holocaust, the Nazis’ victims, the overwhelming majority of whom were Jews, were murdered, their homes and possessions appropriated, their names reduced to numbers. The places where the crimes took place were also erased, whether intentionally by the perpetrators to cover up their crimes, or by the War itself. Those who were there became ashes and those who survived were forever beholden to that which no longer remained.

Judith Glickman Lauder’s photographs capture that absence. In what we see in her photographs we feel the pain of what is missing. That is why they are so powerful and so haunting and need to be seen.

Judith Glickman Lauder will attend a VIP reception and signing of her book on September 25th at 6-8 PM at Peter Fetterman Gallery, 2525 Michigan Ave, Gallery A1, Santa Monica, California 90404. For further information contact the gallery (310) 453-6463.Follow me on Twitter or LinkedIn. Check out my website or some of my other work here. 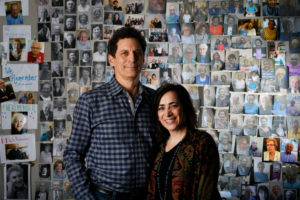